IBM Watson in the epicenter of developers attention

— How can Watson help developers to quickly build cognitive apps?
— How to to build your own custom AI models
— Want to see a demo? We will show how it works with Visual Recognition.
— A Toolkit for developers to get started with Watson today! 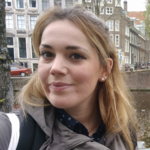 Clemence is in charge of supporting developers using new and innovative IBM technology such as the IBM Watson & Cloud Platform. She works with corporate developers, startups and universities across Europe and help them to build demos and prototypes.

She is passionate about Internet of Things, Mobile & Web development, wearable technology and AI.